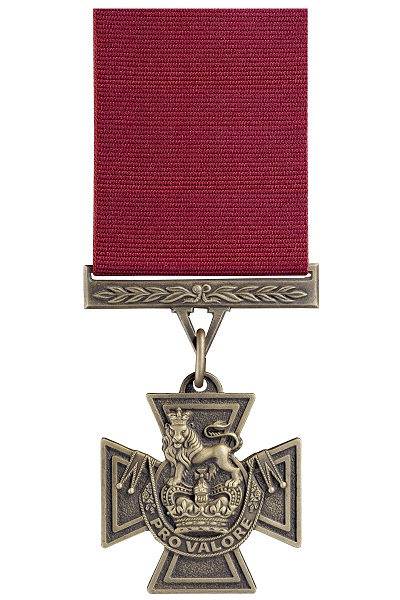 The Victoria Cross “is awarded to persons who, in the presence of the enemy, display the most conspicuous gallantry; a daring or pre-eminent act of valour or self-sacrifice; or extreme devotion to duty.”

Private Jess Larochelle (also known as “Strong Point Larochelle” or “Bullet Magnet”) was originally awarded the Star of Military Valour for his actions on 14 October 2006:
CITATION: “On October 14, 2006, Private Larochelle of the 1st Battalion The Royal Canadian Regiment Battle Group was manning an observation post when it was destroyed by an enemy rocket in Pashmul, Afghanistan. Although he was alone, severely injured, and under sustained enemy fire in his exposed position at the ruined observation post, he aggressively provided covering fire over the otherwise undefended flank of his company’s position. While two members of his Platoon were killed and three others were wounded in the initial attack, Private Larochelle’s heroic actions permitted the remainder of the company to defend their battle positions and to successfully fend off the sustained attack of more than 20 insurgents. His valiant conduct saved the lives of many members of his company.”

WHAT THE CITATION DOESN’T SAY is that he wasn’t manning a mere “observation post”. He was manning a machine gun. In enemy terms, Larochelle was a target that must be DESTROYED.

WHAT THE CITATION DOESN’T SAY is that the two LAVs on that flank had weapon stoppages meaning he was the only sustained fire on that flank when they came under attack.

WHAT THE CITATION DOESN’T SAY is that the machine gun post was planned to be occupied by four soldiers as it was sighted with two C6 machine guns (each a two-soldier crew served weapon). Larochelle was alone!

WHAT THE CITATION DOESN’T SAY is that he volunteered to go to the OP knowing full well that the platoon was undermanned and he would be alone at a machine gun post without any help to operate the weapons.

WHAT THE CITATION DOESN’T SAY is that after his machine gun post was destroyed by enemy rockets, the now DEAF Larochelle literally crawled with a BROKEN BACK and DETACHED RETINA to the now destroyed machine gun position to continue to fight by firing fifteen M72 66mm Rockets in rapid succession! (it’s amazing these rockets had not exploded and killed him on the first attack).

Finally, WHAT THE CITATION DOESN’T SAY is that he continued to occupy his fighting position for an additional TWELVE HOURS after the battle while his company re-grouped and extracted their wounded. When it was time to clear out, his comrades found him bloodied and battered laying among the ruins of two machine guns and the empty casings of M72 rockets.

Not until the next day, after Private Jess LaRochelle helped carry the casket of one of his comrades in a Ramp Ceremony did he seek medical attention.

Two years later, he was still pulling shrapnel out of his body.

You know the answers.

The Rolling Barrage PTSD Foundation endorses the awarding of The Canadian Victoria Cross to Private Jess Larochelle. In doing so we join The Royal Canadian Legion, The North Bay City Council, The RCR Association, The PPCLI Association, Jesse’s Battle Group Commander, Retired Lieutenant General Omer Lavoie and the group “Valour in the Presence of the Enemy” headed by Retired General Rick Hillier.

Please show your support by sharing and signing the petition below.